This is a bit of a rare occasion. I’m writing a post about a book without the book immediately beside me.

You see, I saw it at my beloved local library, and recognized Isabelle Arsenault’s stunning art, so I read it while my daughter browsed. Then we rushed home for Yom Kippur, leaving it behind for someone else to enjoy.

It was on my mind all Yom Kippur. I slightly regret not borrowing it, but it was right to leave it for others. (Still, I need my own copy!)

Which book is this? Jane, the Fox, and Me, by Fanny Britt, illustrated by Isabelle Arsenault. It’s sort of a graphic novel– more on that below. The advantage of being late to the game is I can point you to Maria Popova‘s excellent summary and account of the book, already there on the internet for you. 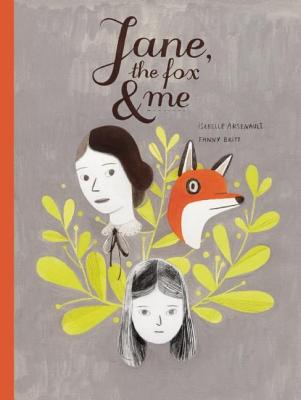 I’m going to suggest you read Popova’s piece first, and I’ll simply highlight a few aspects here: it’s a book about cruelty and bullying, about adolescence and growing up, and about learning friendship and kindness in the face of that cruelty.

Why did it linger in my mind over Yom Kippur? Well, partly because it was a deeply moving read that caught me right in my adolescent insecurities, and it was going to dwell with me whenever I read it. But it felt appropriate to read it over the days of repentance for several reasons:

a) As a parent, I worry for my girl. What if someone else makes her feel insecure or scared? (What if, I catch myself in worse horror, she does the same to someone else?)

b) As someone who grew up with bullying, how do you move past it and grow in kindness and security, helping others rather than dwelling in the past?

c) As someone hurting from pain inflicted by others, how do you repent and grow?

To point (a): I don’t really see the Changeling as the sort of person who will ever be deliberately cruel, and I won’t borrow trouble. She is decidedly the sort of person who takes comments personally, however, and already has. It’s my job to help instill strength and self-confidence in this growing person and help ensure she has the tools to deal with unkindness and face it with grace. But that’s not (yet) what I want to address right now.

To point (b): Thinking about (a) helps me address (b). I feel that grace and radical kindness is the correct response to bullying. Not overlooking the past, but saying, “I’m going to pay off that old feeling by pushing more positivity into the world.” Naive? Maybe. It works for me. That’s also not what I’m talking about right now (yet).

To point (c): If you go into Yom Kippur with pain from others’ on your mind, are you doing it wrong? Aren’t you supposed to be thinking about the wrongs you’ve committed, not the wrongs done unto you?

But I have been made to feel small, feel like being myself is inadequate, and feel frightened. And I do know that every time I’ve made a misstep of which I’m acutely conscious, it has come out of those feelings of inadequacy and low self-confidence. (Obviously there may be things I’ve done of which I’m unaware. What I don’t know of I can’t speak to, though, so I’m focusing on what I do know.) I’ve said things which I regret– almost always when I’ve been frightened for myself, or when I’ve been put down and am trying to climb up, or for a hundred reasons which have to do with not knowing who “Deborah” was any longer.

Now, what does that have to do with Yom Kippur and Jane, the Fox, and Me? After all, the protagonist of the book does not act out when she’s been put down. She’s silent in the face of humiliation. And on Yom Kippur you’re really supposed to think about the times you’ve acted out. Right? “I sinned by doing This or That.” Acted perniciously, obstinately, disobediently.

I think, though, and, again, I am not a rabbi, or a maharat, or anything of the sort, that the protagonist of Jane, the Fox, and Me and I have a misstep, if not a sin, in common: we lost faith in ourselves. We were both made, as we all are, in the image of God. If we listen to people telling us we’re inadequate, and internalize that hurt, we are losing confidence in who we are. And that is someone wonderful.

Jane, the Fox, and Me is in no sense a religious work, and if you’re not religious, either, then you can read it, enjoy it, and learn from it regardless. But if you are, and if you’re in a mood of self-reflection before a major religious event in your life, I recommend it. It’s a good counter-charm to flagellation and self-recrimination, if, like me, you feel you’re pretty good at that on your own…

This is a book of kindness, of acceptance, and of perpetual beauty.

It is also a book, to glance back at point (a) above, for parents to read. It’s a book for helping you help your child be stronger within, more self-confident, less prone to flagellation. I can recognize, now, occasions on which I’ve told my daughter her interests were silly (even if I thought they were) and ridiculous (again, even if I thought they were). That was wrong. Make that crinoline dress for your girl. Help her feel stronger.

I want to end with a word about the format, because I think that’s relevant. It’s called a graphic novel, and I suppose you can call it that. But to me, it’s an adolescent book, partway out of being a picture book, but not yet fully grown into a full-on graphic novel. (NB: That’s a problematic statement, assuming as it does that picture books are for little kids, and graphic novels for older folks. Pretend with me for a minute.) It’s inter-genre, just as the characters hover between ages, just as in identity they hover between who they want to be and who they are.

Just as I, as the reader, hover in self-image between who I was and who I am today.

And it is all, completely, beautiful.

Final, final note: Go back to the Popova piece for the pictures and page views. I linked to it because I don’t have the book with me, and I want you to see the inside of the book. That’s important. So if you haven’t yet read her post, if you don’t even want to read it, scroll and look. Then go to Indiebound or your local book shop or library and drink in the whole book, think about who you were growing up, and think more about who you are today, and how you can be yourself more fully.

Dammit, now I want to snuggle my Changeling.

One thought on “Jane, the Fox, and Me”