Do you have a special reading time?  I do.  I mean, I read a lot– it’s kind of my job, along with writing about what I read, but what I read tends to be abstruse scholarship on fourteenth-century poetry, or the fourteenth-century poetry itself.  While I love doing that, the result is that by the end of the week my brain sometimes feels like oatmeal porridge without even maple syrup to sweeten it.  Then Saturdays come along.

Saturdays are Shabbat for me (the Jewish Sabbath), and, as such, computers are off, cell phones are off, and my work is put to the side.  That means that I usually have a few hours (when the Changeling is napping, for example) when I can pull out something and read.  My one criterion is that they must be novels I can swallow in a single day; I don’t have the patience or self-restraint to keep a book from Saturday to Saturday without reading it in between, so Saturday books are Single-Serving Saturday Books.  Often, that means middle grade or YA novels.  (Sometimes it means Wodehouse or Terry Pratchett.)  But since you might also be looking for some good, easy going reading material, let me list some of my Saturday reading for you:

Rumer Godden (I’m linking you to a fascinating obituary of her in The Independent) is one of my favourite authors to read on Shabbat.  I’m afraid I’ve run out of new-to-me books available from The Children’s Book Shop, but I spent some very happy hours with Miss Happiness and Miss Flower, Little Plum, The Fairy Doll and The Story of Holly and Ivy.  There are more, but they’re harder to access.  All of those I read are decidedly quick reads, with a lot going on beyond the pages of the books.  All are about dolls, but these are not your garden variety sweet dolls who sit still and think sweet thoughts of the sweet little girls who hold them.  There’s genuine anxiety embedded in these stories: will the children look after the dolls?  What happens if Belinda, for example, is naughty towards the dolls?  What if there’s a mismatch between doll and child?  The implications of these questions can go pretty deep: it’s up to the children because adults in these books aren’t always benevolent, and they don’t always make the right decisions.  If Belinda hadn’t been so left out, would she have been so naughty, we ask ourselves– and should the parents have been on the lookout for that eventuality?  Rumer Godden isn’t afraid to stick you with the tough questions at the same time as you skim right through her lovely prose.  I wish I’d read these as a doll-obsessed 9-year-old, but even at 30 I love to read about these dolls! (And, yes, I still love my own dolls: Beatrice being particularly dear to me.  Don’t tell on me, OK?  I’m pretending to be an adult.)

Judith Rossell, author and illustrator of Withering-by-Sea, was something of a revelation to me.  I stumbled across Withering-by-Sea at Tidewater Books, the excellent little town bookstore in Sackville, New Brunswick.  I had run out of reading material, and they happened to have this delightful mixture of Gothic horror and dark magic on their shelves.  The novel, and its sequel, Wormwood Mire, tell the story of Stella Montgomery, a young girl who lives with her three dreadful aunts.  She escapes from their tyranny of propriety in reading a beautiful atlas, but one day has to leave it hidden in the conservatory.  When she goes to find it, she finds herself embroiled in something much darker, more complex, and more magical than she’d been bargaining for…  As she tries to protect herself and a mysterious glass phial from a dangerous magician, she meets not only terrifying villains, but loyal friends, including the spunky Gert (a dancer for the circus) and Ben, who teaches her something about herself… is she fully human, as she’d always thought, or are her aunts hiding something about herself and her family from her?  Wormwood Mire is a worthy successor to Withering-by-Sea: it raises a whole set of new characters (delightful, mysterious characters– although I did miss Gert and Ben) and new dangers.  Stella grows a little by the end, too.  Both are illustrated by the unfairly talented author of the novels, Judith Rossell, and I love knowing that the art really shows you what the author has in mind for the characters.  I impatiently await the third book, and warn you that if you start Withering-by-Sea, you, too, will go about mumbling, “But what about her parents?” and other questions I’ll let you discover by yourself. 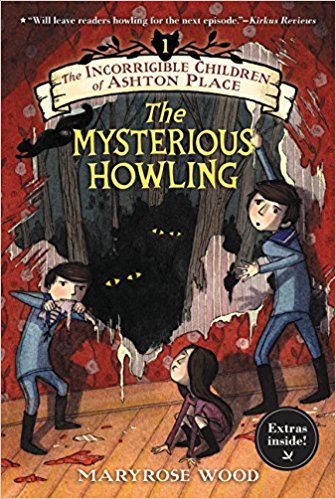 My dear and darling readers, and you’re all very dear and darling to me, this series is another one recommended by Terri at The Children’s Book Shop, who I’m beginning to think doesn’t have my best interests at heart.  I am hooked on The Incorrigible Children of Ashton Place by Maryrose Wood (begin with The Mysterious Howling), absolutely hooked.  I ration them out, Saturday by Saturday, but there are only five of them out currently, and I don’t know what I’ll do without them.  Like Withering-by-Sea, they play with Gothic elements and Victoriana, as reflected in Jon Klassen’s marvellous illustrations, but, also as reflected in the illustrations, they don’t take themselves at all seriously.  The story is of three children raised by wolves in the forest near Ashton Place and captured by Sir Frederick Ashton, the unbelievably wealthy heir to that family.  His young bridge, Lady Constance, hires Miss Penelope Lumley, recent graduate of the Swanburne Academy for Poor Bright Females, to be their governess.  Armed with Agatha Swanburne’s pithy sayings and her own good sense, Miss Lumley (“Lumawooo!” to the children) wades in with a will and takes the children under her wing.  These books touch with skill on certain problems (the plight of governesses, the poor of Victorian London, the incredible power of the aristocracy, etc.) without ever getting bogged down in the issues.  For example, the children’s vulnerability in Ashton Place is constantly at play, always acknowledged, but manages never to disrupt the lightheartedness of the novels.  I’ve laughed more while reading these novels than over any other recent book, but never without a twinge of sympathy for the parentless three children and Penelope Lumley.

The last time I was in Brookline at The Children’s Book Shop I told Terri how excited I was about Cat Valente’s upcoming novel, The Glass Town Game.  A novel about the Brontë children?  I haven’t even got my hands on it and I’m positively twitching with excitement.  Terri agreed, and asked whether I’d read Pauline Clarke’s The Return of the Twelves (now sadly out of print, but there are plenty of copies around on the internet), also about the Brontë children.  I snaffled a copy from AbeBooks as soon as I could and as soon as Saturday came around I delved into 1962 Yorkshire, where young Max discovered a set of twelve little wooden soldiers who walked and talked and told him all about the four Genii who had played with them years ago.  Max gradually discovers that the four Genii were the Brontë children, and quickly falls in love with the soldiers himself.  Alas, scholars hover around menacingly, threatening to ruin his relationship with the little fellows.  It’s up to Max to see them march safely to Haworth to be protected from being whisked across to America, where they certainly don’t belong.  The novel moves at a beautifully measured pace, and instead of focusing on the next dramatic event it allows the character and personality of each person in the novel (including the soldiers) to come through fully and completely.  I loved it, and my appetite is thoroughly whetted for Cat Valente’s contribution to the world of children’s novels about the Brontës, which is apparently a bigger pool of literature than I’d previously thought!

The last novel I’m going to talk about here is The Invention of Hugo Cabret by the brilliant Brian Selznick.  Remember his book The Marvels?  I kinda liked that one, so when I was in a pinch between Wormwood Mire and before I was introduced to The Incorrigible Children of Ashton Place, I got Hugo Cabret.  Here’s the thing: It took me a long time to get around to reading it.  First of all, I was worried I wouldn’t love it as much as Marvels, and I couldn’t bear to be disappointed.  (A perfectly stupid worry– a) trust Brian Selznick, and b) Terri promised me it was as good or better.)  The second worry was that I wouldn’t be able to read it in one go– it’s a thick book!  But here’s the thing: a huge proportion of the book is devoted to Brian Selznick’s glorious illustrations which interleave his equally glorious text, and make the story move along very quickly indeed.  I read it in a couple of hours, maximum, and that was without hurrying.  I remember struggling with giving a sense of the book without betraying the story with Marvels, and I have the same issue right now.  Suffice to say that it follows a boy named Hugo Cabret as he strives to resolve his pain at the tragedies he’s undergone and form a new life for himself.  He has to learn to open up to the few people who can help him and take cautious steps out of his own shell into the new world opening up to him.  It’s a heartbreakingly beautiful book, both physically and emotionally, and if there’s one author who I really think is doing something new in modern novels, it’s Brian Selznick.  The intersection of art and text is closer in his books than in any since the illuminated manuscript.

And so, dear readers, this list should provide enough books to keep you occupied for a few Saturdays.  And what about you?  Do you have special “you” reading times?  What’s engaging you now?