I begin with a disclaimer: the Changeling found this book ever so slightly frightening.  Please do not let this deter you from exploring its pages; these days, she even finds books like The Paper Bag Princess scary, and I can’t figure out why.  (But she’s not scared by Outside Over There.  I’m perplexed!)  So while I normally try to limit this blog to books both she and I love (or novels I particularly enjoy), I’m going to break with the usual pattern for this one.  It’s just too good not to share.

You see, I had a lunch date with my cousin in Brookline today, and, naturally, took the opportunity to poke my head into The Children’s Book Shop to see what was new for the spring.  The lovely staff there responded beautifully when I showed up and said, “Hi, I was just in the area and wondered what was new here.”  Boy, did they ever deliver.  People, this is a great season of new books.  And one of my favourite new books was Life on Mars by Jon Agee.  We’ve met him before for Lion Lessons. 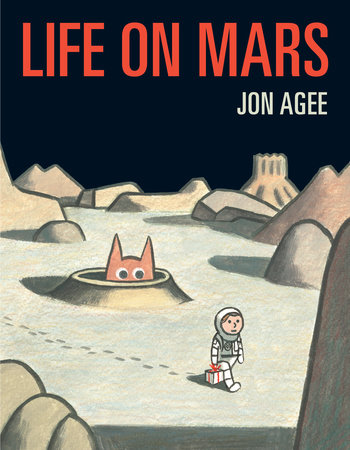 Life on Mars is just as cute a book as Lion Lessons, and with the bonus that I didn’t have to give away my copy as soon as I had the pleasure of reading it.  They even wrapped it up for the Changeling with a sticker on the front, because the staff there are just that nice.

But what makes it so special a book that I recommend it here even without the Changeling’s wholehearted endorsement?  The answer is: Chocolate cupcakes.

Let me explain.  (I’m resisting the urge to add, “No, let me sum up.”  I’ve watched The Princess Bride a few too many times, I guess.)  The story is of an astronaut who flies his spaceship to Mars (reminding me strongly of Harold’s Trip to the Sky).  He has a very specific purpose: there are those who don’t believe in life on Mars, but our astronaut does.  His job?  To locate life on Mars and silence the unbelievers.  So off he goes to Mars, carrying a package of cupcakes as a gift for the friends he’s inevitably going to make there.  But once there, he’s dismayed: it’s so arid and rocky!  What if… what if he’s wrong and the naysayers are right?  He walks around without seeing a single sign of life until he’s even lost his way back to his spaceship.  He puts down the box of cupcakes as he roams.  But what’s that?  A flower!  Life!  And then– his box of cupcakes?  How did they get there?  Finally, he climbs a mountain to help locate his spaceship, and then off he goes.  Settled into his spaceship with his Martian flower, he opens the box of cupcakes with satisfaction– he deserves a treat!  But… wait, why are there only crumbs in the box?

You see (spoiler alert!), the whole time our astronaut has been roaming over Mars, a creature has been right behind him.  A huge, orangey-brown, Martian creature who apparently very much enjoyed the chocolate cupcakes and very neatly closed and tied the box up again.  And our astronaut, earnestly seeking life on Mars, never even noticed the creature, even when he mistook it? he? she? for a mountain and climbed it to try to locate his spaceship.

May I just indulge myself for a second?  As an academic, it is somehow extremely satisfying to watch this astronaut scaling the sides of the creature he’s looking for, totally oblivious to the fact that the whole point of his research is right there beneath his feet.  I’m surprised that I don’t find it more frustrating than satisfying, but it’s true– all I feel is satisfaction that, dear God, at least I’m not alone in sometimes (often) feeling like the whole point of my work is somewhere but I can’t find it… until I open the now-empty box of cupcakes and realize that, oh right, that was it all along.  Followed by the realization that: Dammit, I missed the cupcakes.  What I’m saying is that, if you’re anything like me, you’ll recognize yourself in this book.  Maybe you’re not the astronaut– maybe you’re more self-aware than we are and are always on top of your research.  In that case, you probably identify with the Martian creature, patiently hanging out right nearby, just in case the astronaut will finally notice him.  Or maybe you just like chocolate cupcakes.  But I think that whoever you are, you’ll probably sympathize with some aspect of this adventure.  And maybe after recognizing this parable’s application to my own life I’ll be better on the lookout for the cupcakes.

As for children?  Despite the fact that the Changeling found the book a little bit scary when she thought it over afterwards, during the reading itself she very much enjoyed looking for the creature in each picture and was deeply concerned for the fate of the chocolate cupcakes.  In fact, hours after we’d read the story, as I was getting her ready for bed, she suddenly reminded me, “The cupcakes weren’t in the box.  They were all gone!  The creature ate them.”

To be honest, I’m not sure how much she understood about being on Mars: we haven’t done much astronomy together and she doesn’t really know about other planets.  (Give her a break: she’s not even four yet.)  But she definitely got that the astronaut had gone to a new place and was looking for something he couldn’t find.  If your child knows more about outer space and cares about planets more than she does, that would be fantastic, but even without that background I think this book is a total winner.

One warning: before you read this book either to yourself or to your child-audience, do make sure that you have cupcakes in the house.  I really want cupcakes now, and I hold the lovely owner of The Children’s Book Shop completely and totally to blame.

One thought on “Life on Mars”