When I work with my students at the local school, the teacher encourages me to make sure the students don’t just automatically go for the books they already know how to read– have them read something new.  I nod agreement, because this is one of those things which is so very obvious: it’s simply good pedagogy, and she’s doing her job well.  Except that I sympathize with the students on two grounds: a) the Red Rocket Readers they’re given are as boring as can be and all very similar to one another; b) I was once the kid who didn’t want to branch out from very circumscribed reading styles, and it took me a long time to figure out how to vary my reading while remaining true to my taste and myself.  And I still sometimes surprise myself.

I was stuck in the nineteenth century for a long time: Jane Austen, Charles Dickens, even Ann Radcliffe. 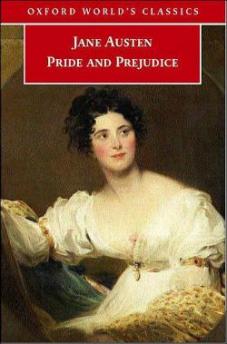 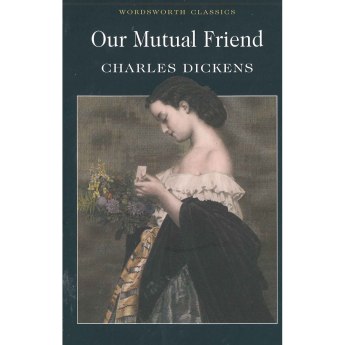 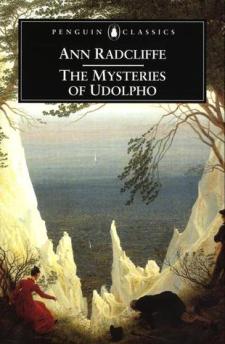 But my teachers and even some of my family kept trying to get me to read more modern books.  I didn’t want to.  I felt bad– I was beginning to get the impression that there was some especial virtue attached to reading modern books– but they seemed so dreary to me.  I wanted something richer, something funnier, something more elegant.  I figured out how to find that through my close school friend, who knew my tastes very well and has a knack for matching books and people: she got me onto Sir Terry Pratchett, may his memory be for a blessing.  Not exactly what my teachers were going for, but his humour appealed to me, as did his depth of knowledge: if P. G. Wodehouse were angrier and a bit wilder, there wouldn’t be much difference between him and Pratchett.  As it is, thanks be to the Almighty, I get to read and enjoy them both. 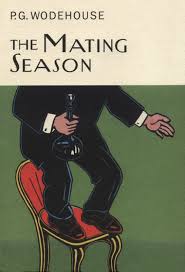 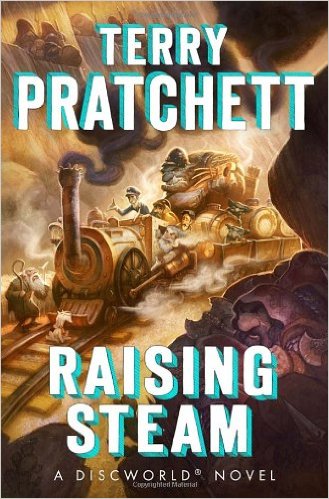 But why do I ramble about this?  It’s to show you how tastes work: you can’t force taste.  There’s no virtue in preferring one type of book to another.  I recently read part of a book which I could tell was excellent, but didn’t appeal to me.  I put it down with a sigh.  It wasn’t for me, and I regretted that.  But sometimes we encounter surprises on the other side of the spectrum.  Or at least I do. 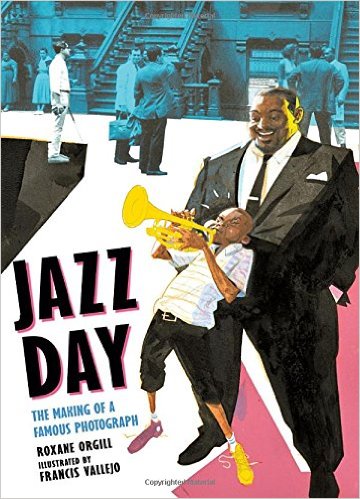 I am no lover of jazz music.  The closest I come to loving jazz is in The Princess and the Frog, thank you Disney.  I love the music for that movie, but, apart from that, I’m afraid I just don’t listen to much jazz.  I’m a Classical music girl, and, as with my taste for the nineteenth century, I’m at peace with that.  That being the case, I was sure that Jazz Day wouldn’t be to my taste.  It might be good, I may be able to appreciate it, but would I love it?  Unlikely.  I put it aside, ignoring the tugging I felt.  Then I was at another bookstore, in that weakened state which proximity to children’s books always induces in me.  I saw it again.  I didn’t have much time.  I nabbed it to think about whether or not I really liked it later.  And think about it I did.  Jeepers, people, this is one excellent book, whether or not you love jazz.

It’s got jazz in it, sort of.  I mean, it would probably be cool to listen to jazz as you read this book, but it’s hardly obligatory.  I went for Berlioz instead because I had a hankering for some Berlioz.  I wasn’t struck by lightning.  But what it truly is– really and truly– is rich.  It’s full like a plum pudding.  It’s got history.  It’s got biography.  It’s got imagination.  It’s got rhythm.  It’s got music.  It’s got plenty of men and a few women, too.  Who could ask for anything more?  (Sorry, so sorry… I couldn’t resist.)  Well, if you do ask for something more, you’ll find it in the illustrations and imagination which Roxane Orgill and Francis Vallejo bring to the book in a perfect melding of fact and fiction.

But hang on, you say: tell me a bit more about what this book is.  Fair enough.  Back in 1958 a man named Art Kane put out a call to all jazz musicians who could to show up at a certain place in Harlem, by an “absolutely typical brownstone,” as he said.  He was going to take a photograph and have it printed in Esquire to show off the glory days of jazz music.  Here’s the photograph (thank you, Wikipedia): 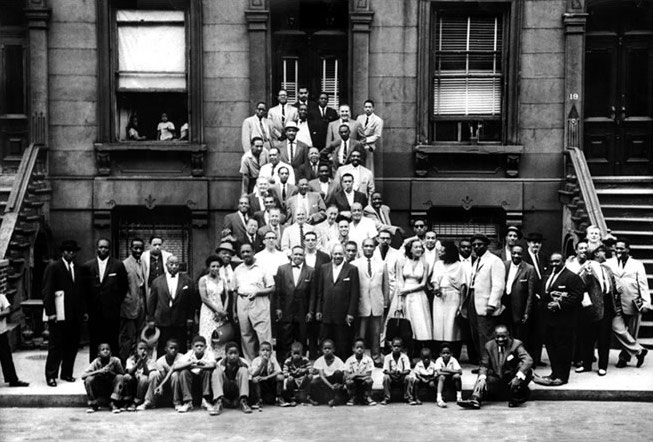 This book takes that photograph and, through a series of poems about the people in the photograph, it opens up the picture to let you inside the day: inside the history, and the clothing and the people and even the little kids who lined up on the sidewalk for a joke and weren’t shooed away.  It was only a semi-planned event: Art Kane had no way of knowing who’d show up, or how the shoot would go, or who would follow instructions.  He did little by way of shouting instructions and let people be themselves.  It’s an open, sincere, very candid sort of photograph, showing who came that day, and some of the kids who happened to be around.  The book is equally open and candid, equally sincere, and I can only imagine the kind of work that went into making it feel so semi-planned and “take it as it comes.”  Here’s an example of one of the two-page spreads, courtesy of Candlewick: 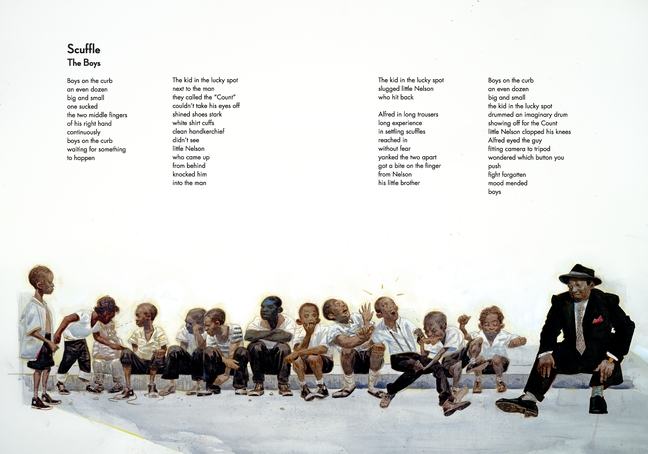 You can see how it’s taken from the photograph above, right?  The kids all in a row beside Count Basie, getting into a scuffle, as kids do.  There’s something ever so slightly unfinished feeling about the contours of the picture: the emphasis, they say, is on this part… we’ll get to the next portion when you turn a page or two, OK?  Fact and fiction, merging, blending.  Who knows much about that scuffle?  Well, says Roxane Orgill, if you do enough research, you can see it.  And if you read to the last pages of the book you’ll see she did plenty of research (her bibliography is most impressive).  But research isn’t enough: what Roxane Orgill and Francis Vallejo really provide is the imagination which brings that period, that spot in history to life.  You can see it, hear it, smell it, hum it as you read the poems– and, boy, do they read well aloud!– and look at the pictures.

Folks, it doesn’t matter what music you love.  It doesn’t matter where you think your tastes lie.  Give this book a chance.  Your kids will identify with the scuffling kids at the front of the picture and you’ll be enchanted by the Count or some of the other musicians– give it a chance, and see if you’re as taken by it as I am.  Let me know if you are.  I have a feeling I’m not alone on this one.